Charging Battery on a Touareg

Children playing in the car, forgetful spouse... who knows. Flat battery this morning in the beast known as a VW Touareg. Automatic transmission, so no chance of bump starting this 2 tonne monster either.

A quick search of the manuals to find the battery killed off my first thought - whip it out and re-charge it. Alas it's 'very complicated and must be handled by specialist personnel'. Even my engineering prowess baulked at trying to remove it (it's under passenger seat BTW). So gave up for a while and generally pondered life. 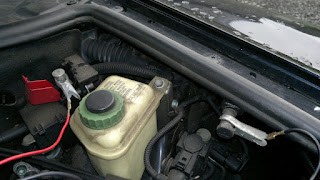 However, VW have placed some funky little terminals in the engine bay (nearside) so you can charge it in situ. Red clip goes on the terminal under the little red cover (to left of photo); black clip goes on to the earthing stud (to the right of photo), which has a convenient lightning symbol etched onto it.

Leave it for a few hours with a meaty charger, and life is back to it's fuel-guzzling, carbon-producing self. Would be easier if a nice publisher, such as Haynes, produced a workshop manual for this. Serves us right, I suppose for buying such a large vehicle, but a necessary evil, alas.
Posted by snorker at 09:13 2 comments: Links to this post

Downloading Massive Files with a Mac

Damn that slow broadband. I needed to download the latest version of the Apple Developer's iOS toolkit. A whopper at 4.1GB. The best I've ever got from my ISP is about 0.7M. I thought I'd click on the HTTP download link and leave it running overnight. Next morning: dismal failure at about 3GB, so no DMG file downloaded :(.

Inspired by this post, I had a go at WGETing the file instead, which should be a faster download, and automatically accommodate errors/breaks in net connection... but I had a few hurdles to clear:

Posted by snorker at 20:50 No comments: Links to this post